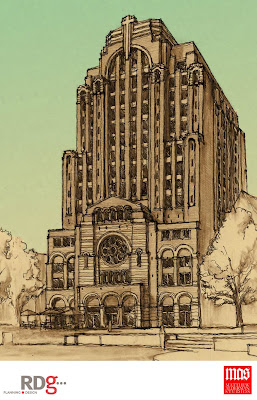 The project poses a number of intriguing challenges; it was commented when I was first discussing the possibility of involvement that I was probably the only ecclesiastical design consultant in America who had made a systematic study of early twentieth-century churches with similar mixed-use programs, which the concept is reminiscent of. I was brought on board once most of the internal program had been worked out, as well as the basic height and width of the building, but a lot of the exterior massing and detail had not yet been worked out. After consultation with the clients, a form of Romanesque was adopted as the preferred style, given its obvious ecclesiastical connotations, its ability to blend with a more modern Deco aesthetic, and its ability to withstand budgetary simplification. The interior of the building will house a variety of dormitories, apartments, meeting rooms, study lounges, and other facilities for the campus ministry, as well as the chapel, which is accessed through a large lobby and will be on the second level of the structure. It was important to impart an ecclesiastical character to the principal facade while at the same time asserting the building's mixed-use status. In my own sketches, I drew on the work of Ralph Adams Cram at Christ Church Methodist in New York, a rugged urban ecclesiastical plant with a great deal of dignity and personality, and Bertram Goodhue's slightly earlier St. Bartholomew's, just down the street on Park Avenue. St. Bart's offered some particularly useful ideas, as the General Electric Building, a particularly lofty high rise, was built behind it and designed to serve as a suitable low-key backdrop for the church's Byzantine dome, in much the same way the main shaft of the structure relates to the church facade below. This is also an important precedent given the neighboring structure, Pres House, the Presbyterian university church, is a landmarked Gothic revival structure, so while St. Paul's should make its identity clear, it must also create a symbiotic relationship with the older structure. I imagine you will hear more from me on this in the next few weeks as the story develops further and we get reactions from the vox pops. Everything I have heard so far has been very positive. I encourage you in any case, if you live in Wisconsin, to tell your friends and support this very worthy cause. Not only could this be a great moment for traditional architecture, it could be a unique and fruitful opportunity for future generations of young Catholics in Wisconsin and throughout the Midwest.
Matthew at 12:14 PM
Share