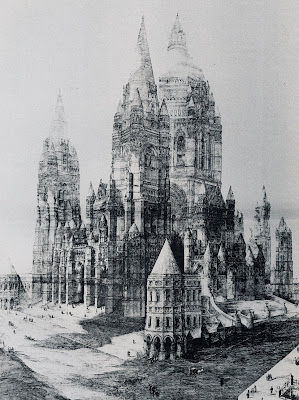 The competition for New York's Episcopalian cathedral, St. John the Divine, saw many flamboyant entries, such as Carlo Sada's fanciful proposal for a 1,200 foot tall "skyscraper church" which would have overtopped the Manhattan skyline, as well as most tall buildings in the world at the time. Others, featuring a crossing bristling with four separate towers, resemble an interesting cut-and-paste Photoshop accident, and a few fairly handsome efforts in a classical style challenge our retrospective notions of the absolute supremacy of Gothic during the period. There's even one ambitious if awkward astylar effort by the adolescent Goodhue, precocious, if perhaps not having hit his stride quite yet.

One truly wonderful--and slightly hallucigenic--standout was W. Halsey Wood's proposal, titled Jerusalem the Golden. It is filled with all manner of recondite symbolism and extravagant touches, such as a great organ, a choir organ split up between the two towers, and at least eight or nine lesser organs placed over the entrances to the apsidal and even the nave chapels. The dazzling display of mystical symbolism was a bit too much for the earthbound press to appreciate, who, at one point panned Wood's elaborate reckonings of his numerical iconographies, wondering amid all these tribes, apostles and angels, what was actually going to hold the building up. (To give a sense of the massiveness of the structure, the choir itself would have been seventy feet wide, one hundred and thirty-five feet long, and contain one hundred and fifty stalls to each side.)

Wood's symbolism was hardly caprice. He ended up submitting a plan carefully annotated with the relevant lines from the Apocalypse of St. John which motivated his design choices. (He was not alone--the winning design, a rather inoffensive exercise in Byzantinized Richardsonian Romanesque by Heins and LaFarge, which was later abandoned in the middle of construction, was equally encrusted with symbolism, though not without some odder touches: "Seated statues at the peaks of the great gables represent great teachers of mistaken religions, Buddha, Muhammed, and Confucius being thus subordinated to the more perfect Christian faith." (I suppose, in retrospect, it is no more heterodox than the be-haloed Aristotle in one of the windows of St. Vincent Ferrer about forty blocks to the southeast, even if somewhat more peculiar.)

Some aspects of the design are a little strange--the rather weak articulation of the principal elevation behind the low screen of the narthex; the wealth of freestanding or nearly-freestanding towers, the stumpy nave swallowed up by the great crossing; but many of these are simply traceable to the titanic scale of the project, a feature common to every one of the designs submitted. In some respects, it was as much a skyscraper church as the Sicilian Sada's proposal, if perhaps in greater continuity with the past. Indeed, as centralized and upright as the design appears, in plan it rather resembles San Marco in Venice, and preserves a clear sense of liturgical directionality within the interior, even if tempered with the functional emphasis on preaching characteristic of American Episcopalianism at the time. It was undoubtedly the most creative, innovative and imaginative proposal, and deserved its moment of glory, though it never came.

Wood's failure devastated the man, and he died shortly thereafter. His few built works are, by comparison, fairly conventional examples of the period. His massive central tower, covering the congregational space close to the pulpit, is thought to have influenced Goodhue's proposal for St. Bartholomew's Church, which featured a prominent "ciborium," or high dome, which was unfortunately not completed as originally designed. In both, it represented an interesting--and fairly successful--attempt to coherently articulate, at least according to Christine Smith in her account of St. Bart's construction, a "low church" theology of divine immanence in the lavish artistic terms usually restricted to "high church" expressions of God's transcendence. Today, fixated as we are on the gypboard-lined House of the People of God, it is interesting to see that even this communitarian view of the liturgy, whatever theological concerns we might have about its neglect of the sacrificial aspects of traditional worship, at the very least need not be ugly, a-hierarchical or architecturally incoherent.

Cram wrote in 1936 that Wood, had he survived, might have been "potentially one of the great architects of modern times," commenting further that the design was "simply astounding... had it been built it would, I am persuaded, have marked an era in the development of American architectural style.... Visionary - impracticable and fantstic if you like, wholly original and combining instinct with tremendous vitality, it represented an emotional impulse that, I believe, could easily have been given a rational practicality if only the ecclesiastical authorities of the time had had the imagination and the courage to see their opportunity and avail themselves of it." 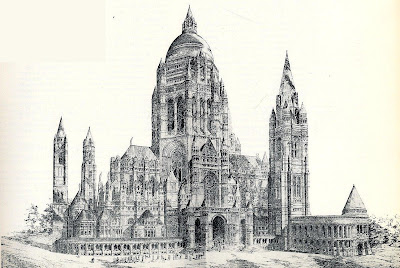