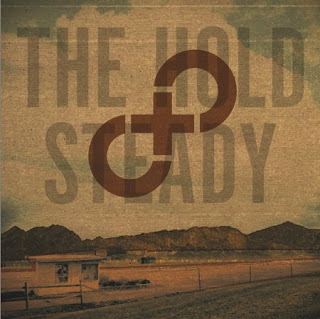 In a pleasant coincidence, one of my favorite bands, The Hold Steady, has been getting some play in the Catholic press lately, with a very good piece in America discussing their "hipster orthodoxy," and an interesting recent counterpoint of sorts on the Commonweal blog. Also, the band was recently featured in an NPR segment that focused especially on the lead singer, Craig Finn, and his "religious but not spiritual" outlook.

The Hold Steady's sound is a great blend of two interesting styles: the classic rock style of Bruce Springsteen and the punk/pop Minneapolis sound of the 1980's exemplified by The Replacements (Finn hails from the Twin Cities area, went to Boston College, and now lives in Brooklyn). Despite clear acknowledgment of influences, the sound manages to be fresh and original, especially in Finn's tales of lives gone awry and the possibility of redemption. All of this has run through their first three albums, especially Separation Sunday and the breakthrough Boys and Girls in America, and it continues in their latest, Stay Positive.

Stay Positive kicks off with "Constructive Summer," a really fun tune that talks about the possibilities latent in the summer season even in a town where the grim reality is that you "work at the mill until you die." It's a classic Born to Run kind of rock-as-escape song, with Finn delivering his "annual reminder, that we can all be something bigger." Yet there is some ambiguity here, and one has to wonder whether the claim in this song that "we are our only saviors" holds up with what is in store for Finn's characters on this album.

The second song, "Sequestered in Memphis" is the first single off of this album, and it does this serviceably, though at nowhere near the level of Boys and Girls in America's transcendent "Stuck Between Stations." The album picks up with "One for the Cutters," a compelling, zither-accompanied tale of a girl whose college adventures go terribly wrong. I found what follows, "Navy Sheets" to be something of a throwaway and also in somewhat bad taste - not a highlight. It in turn is followed by "Lord, I'm Discouraged," a dark story about a woman who refuse to admit she's being badly abused. This has been a big hit among reviewers of the album, but I've been a bit slower to get into it. I also find the next song, "Yeah Sapphire" to be less than compelling.

A real highlight comes with "Both Crosses," a song heavily centered around a woman who has visions about two men being crucified, including classic lines like "Hey Judas, I know you made a big mistake/Hey Peter, you've been pretty good since Easter break," and also manages in the same sentence to make a poking reference at Billy Joel and use the word "transverberate" in a rock song. This was probably my favorite song on the first listen a few weeks ago, and it's definitely a keeper. "Stay Positive," the title track of the album, brings back the fun of the first track in a short but sweet rocker that I found also to be a highlight. "Magazines" I found to be alright, and perhaps I'd find "Joke About Jamaica" better if I was a bigger fan of "D'Yermaker," the Led Zeppelin song it spends a good deal of time referencing.

The final track, "Slapped Actress" is definitely a highlight. The title refers to this song's breaching of the fourth wall to show that "some nights it's just entertainment, but some other nights it's work." This is meta-rock, rock about rock, at its finest, and provides a great ending to a very solid album. The beginning of the song also brings back the mystical theme from "Both Crosses," as the protagonist instructs his girlfriend not to tell others about her visions.

Not every song on Stay Positive is a classic, but overall I found it to be a very good album, and definitely worth your listen, especially some of the songs I've pointed out as highlights. I also find The Hold Steady encouraging in the sense of providing intelligent rock music that has a religious imagination. The articles I highlighted above debate this topic in greater depth, but I would opine that The Hold Steady demonstrate for us the great breadth of the Catholic imagination, as the idea has been developed by David Tracy and Andrew Greeley, among others. This is rock music soaked in Catholic themes of sin, redemption, and mysticism, and it develops them in mature ways that are worthy paying attention to. It also demonstrates that the Catholic imagination is not only expressed by talk explicitly about religion and faith, but rather encompasses the whole world in which they operate, and seeks to redeem it. The Catholic imagination does not narrow us in any way - rather it broadens us by enabling to find and to express the realities to which our faith bears witness in unexpected places and ways.