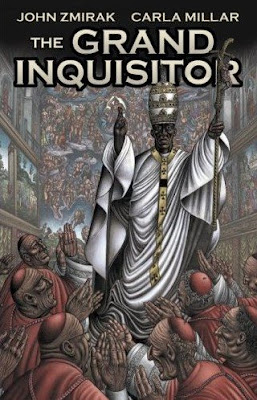 At first glance, it seems designed specifically to freak out everyone in its numerous potential overlapping markets--an intricately Gothic comic book, its dialogue written in elaborate blank verse, its plot inspired by and title borrowed from Dosdoyevsky's heavy-going Grand Inquisitor, and filled with all manner of strange hellfire, Marian visions, doctrinal arguments, and one deeply creepy Infant of Prague statue. But the author knows all that, already, and it is to his credit he forged ahead to produce this suspensful theological roller-coaster ride of a graphic novel.

The brilliance of John Zmirak's first graphic novel, The Grand Inquisitor, is precisely that its genre-bending, everything-but-the-sacristy-sink extravagance works so well. Uptight crypto-Jansenists will probably initially dismiss it as frivolous, beige Catholics as a Traddy screed, but those who actually read the text, and consider the elaborately-drawn illustrations for more than five seconds, will be rewarded.

(Plus, the illustrations have all sorts of wonderful little surprises embedded within them--conclaves, Tridentine liturgies, Cardinal Mahony playing golf, and my favorite, the Infant of Prague in full armor.)

The tale is simple, but all its permutations are profound. Sometime in the near future, a papal conclave drags on as the College of Cardinals finds itself at a deadlock. Tension mounts outside the Vatican walls. The liberals stage a walkout and hurl their scarlet robes to the crowd below in protest. The few remaining electors choose a complete unknown as the next pontiff, an African monk from a forgotten Traditionalist order. (Think Hadrian the Seventh, but with real saints and real sinners facing off rather than an empty conflict of aesthete poseurs and vulgar bureacrats). Unfortunately, one prince of the Church, possessing his own strange and alarming agenda, arranges a mix-up at the new pontiff's airport pickup. The vast bulk of the story deals with the confrontation between the cardinal--incidentally, a dead ringer for Teilhard de Chardin--and the simple priest, now imprisoned in the mental ward of a Roman hospital along with a dozen or so deranged papal claimants of a less legitimate nature. What happens next will decide the fate of the Church, and with it, the world.

In the hands of nearly anyone else it might have turned into a clunkily-plotted Dan Brown novel, but instead it takes a wholly unexpected and thought-provoking turn. Indeed, it amazes me how quickly the reader is drawn into the story, even though it contains no car-chases or fantastical BOOMs! and ZAPs! but focuses instead on the claustrophobic struggle--sometimes spiritual, sometimes quite physical--between the African Carthusian and rightful pontiff-elect, his captor, and a mystical Eastern-Rite cardinal the villain has also imprisoned. All three are remarkably well-imagined and believable characters, wrestling with equally believable, though terrifying, existential problems. Even the traitorous, wire-pulling cardinal does his dark deeds out of the twisted sort of logic you or I could succumb to in the face of despair.

While deliberately lacking the (reverent) snarkiness of his Bad Catholics Guides series, it still operates in much the same way--a Christianizing search-and-rescue operation of a whole genre that simultaneously functions as counter-cultural polemic and intra-ecclesial critique while at the same time still holds together as a coherent and gripping narrative. The luminous blank verse doesn't hurt either, and its stylized solemnity is the single fixed point in a swirlingly tumultuous tale.

The plot--with its scheming clerics and wild visions--is, of course, a fantasy, a theological thought-experiment, and nobody would claim otherwise, but reading it can't help make you wonder if perhaps you too might be guilty of the same self-rationalizing waterings-down of Catholicism that lie at the heart of the book's conflict. Zmirak is articulating something very complex here--a return to Tradition with real, serious mercy, rather than the amnesiac indifference that has unconsciously colored much of our cultural and religious life for the last forty years. It is not about any one pet issue, left or right. It is about the Faith. The Grand Inquisitor is not about any one agenda within the Church today, but for a call for the Church to simply be the Church, just and merciful, reasonable and mystical, ever-ancient and ever-new.